The quarter was dominated by global inflation increasing further to new multi-decade highs. Interest rates rose sharply as central banks responded to the risk of inflation rising even further above the level they target. As a result, returns for both share markets and fixed interest (bond) markets were negative for the quarter – a highly unusual occurrence. Markets are now delicately poised as investors wait to see whether inflation has peaked or whether central bank efforts to curb inflation may force economies into recession.

Financial markets entered the quarter after having made a sharp and painful adjustment in the previous quarter to inflation jumping to multi-decade highs and an expectation that while central banks would respond with rapid interest rate rises, these issues were now largely already priced in.

Unfortunately, this proved not to be the case. In the United States, the world's largest economy and reference point for all financial markets, annual inflation for May 2022 rose to 8.6%, with broad-based increases across many categories. More worryingly, separate data showed households' expectations for where inflation could settle over the longer-term rising too, highlighting the risk of higher rates of inflation becoming entrenched.

The scale of the recent explosion in inflation is evident in the chart below, which illustrates the consumer price index (CPI) percentage change (over a 50-year period) across various countries and economic regions. 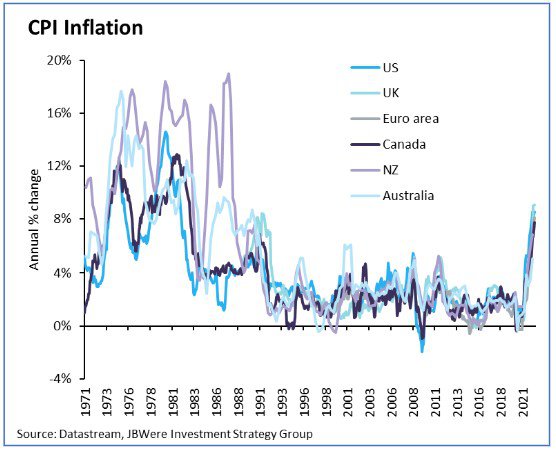 This expectation has led to further significant increases in long-term interest rates (bond yields), which are illustrated in the chart below for various 10-Year Government Bond Yields over the last seven years.

What has this meant for financial markets?

The sharp increase in interest rates impacts share markets in many ways. Directly, interest rates (or bond yields) are an important input when calculating a company's long-term value. All else being equal, the higher the interest rate (or discount rate), the lower the valuation. Indirectly, central banks are using higher interest rates to cool economic activity, which then impacts companies' profitability or earnings. This latter point has become a greater focus as central banks have turned ever more aggressive.

The differing fortunes of various asset classes are illustrated in the chart below. This shows returns for asset classes in the MAS KiwiSaver Scheme Balanced Fund. Returns for other MAS funds are very similar.

*The return for International Fixed Interest is after third-party manager fees. Otherwise, returns are shown before fees and tax. For illustrative purposes, the Australasian equities asset class has been separated into Australian equities and New Zealand equities.

Key points to note in the chart above:

What this means for our funds

The chart below shows returns to 30 June 2022 for all funds in the MAS KiwiSaver Scheme.

*Returns are after total annual fund charges and before tax. The returns for nine years are annualised returns.

Key points to note from the chart above are:

With global share markets having fallen considerably from their highs in late 2021, our investment manager, JBWere, judges them to be arguably beginning to offer an attractive risk/return proposition for long-term investors. However, JBWere is not yet prepared to change much in the way of overall exposure to share markets given that global economies are at a delicate juncture for their inflation and growth outlook.

If inflation shows signs of beginning to fall, shares (and probably bonds too) are likely to strongly increase in value as a lot of bad news on the inflation front is already priced in by markets. However, if inflation proves more persistent, central banks are making it quite clear that they are prepared to drive their economies into recession to tame inflation, which is hardly a favourable backdrop for share markets (although this would be expected to benefit bond investments). Ultimately, the near-term performance of financial markets hinges on this balance between inflation and growth, which remains highly uncertain.

As a result, JBWere currently thinks investing in line with funds' long-term target asset mixes, rather than holding fewer or buying more shares, is the appropriate strategy until they have further clarity on the inflation and growth outlook. That said, within the equity asset classes, JBWere has a modest tactical preference to the relatively defensive New Zealand equity market as opposed to the more cyclical Australian and international equity markets, and where appropriate is looking to selectively increase the relative exposure to New Zealand equities within the funds.

You can find out more on JBWere's outlook and strategy here.

What does this all mean for Members?

Financial markets are unpredictable, and your investments will perform differently over time. So, it's reassuring to know that our skilled investment managers are closely monitoring developments in financial markets and actively making decisions to try to protect and grow the capital of Members.

At times like these, it's important to keep the long-term in mind and see past any shorter-term peaks and troughs. While falls in your account balance can be unsettling, it's reassuring to know that you can speak face-to-face to your dedicated MAS Adviser who will work with you to develop a sound investment strategy and help you stick to it during challenging times. There is no additional cost to speak to a MAS Adviser and because they are not paid commission, you can trust their advice.

Please complete this form to book an online or phone meeting, and we will be in touch.

We also have useful online tools to help you:

Our Risk Profiler Questionnaire can help you see if you're in the right fund for your circumstances.

Our KiwiSaver Retirement Calculator can help you understand if your retirement savings are on track.

If you decide to change your fund after reviewing your risk profile or meeting with a MAS Adviser, you will need to complete an investment strategy change request form.

There is no fee for switching.

You can seek weekly updates on fund unit prices and returns on our website:

This article is of a general nature and is not a substitute for professional and individually tailored advice. Medical Funds Management Limited, JBWere (NZ) Pty Ltd, and Bancorp Treasury Services Limited, their parent companies and associated entities do not guarantee the return of capital or the performance of investment funds. Returns indicated may bear no relation to future performance. The value of investments will fluctuate as the values of underlying assets rise or fall.

MAS only provides advice on products offered by its subsidiary companies. Advice is provided by MAS or by its nominated representatives (who are all MAS employees).

Our financial advice disclosure statement is available here or by calling 0800 800 627.

The Product Disclosure Statement for the MAS KiwiSaver Scheme is available here.

The Product Disclosure Statement for the MAS Retirement Savings Scheme is available here.

Medical Funds Management Limited is the issuer and manager of both of the Schemes.

28 June 2022 - In-house lawyers will benefit from a new partnership agreement between ILANZ and MAS.

17 June 2022 - Since we last reported on investment markets, the global share markets have continued to weaken significantly with the New Zealand share market not immune to the same decline.