Two of the country’s best young in-house lawyers were celebrated at this year’s annual In-House Lawyers Association of New Zealand Conference in May. Charlotte Moll of Warren and Mahoney and Nathan Watt from OceanaGold were this year’s joint winners of the Young In-House Lawyer of the Year award, sponsored by MAS. The award recognises the work and potential of the country’s best young in-house lawyers, and the winners each received $5000 toward initiatives to help them develop their careers. 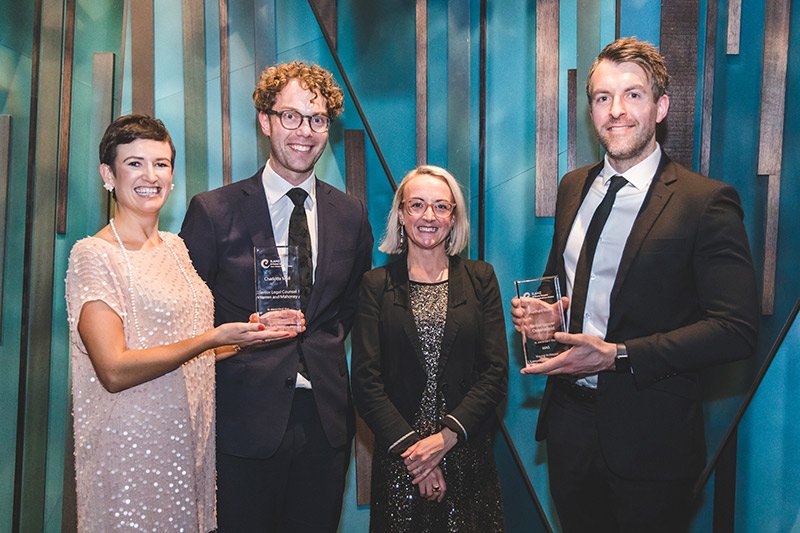 The legal profession is in Charlotte Moll’s blood. Growing up with a lawyer dad, who is now a judge, Charlotte and two of her three siblings have followed in his footsteps and become lawyers too.

Now working as senior legal counsel at renowned architecture practice Warren and Mahoney, Charlotte is thrilled to have been named one of the two winners of the Young In-House Lawyer of the Year award.

Charlotte began her career at Russell McVeagh, which gave her the opportunity to do in-house secondments. Charlotte says “I loved having my clients become my colleagues, getting to know them in a more personal way, and finding out all the details of a company that you can sometimes miss out on if you’re giving legal advice externally.”

Her first in-house role was at Fonterra, an organisation with “a brilliant legal team”, and she worked at Vector prior to joining Warren and Mahoney in July 2020.

Charlotte says her work at the architecture practice, which was founded in New Zealand and is now international, aligns closely with her values.

“The company is filled with really talented people doing incredible work, and has a strong values system too. We work closely with iwi here and with First Nations in Australia and the Pacific. It is important to us to create inclusive design through these partnerships.

“Sustainability is also at the forefront of everything we do, and we’ve nabbed a load of awards on a global scale for our sustainable building designs.”

Charlotte says a real highlight of her career was when her name was called as the joint winner of the award.

“Winning this scholarship is a major moment. This is awesome motivation to think about my goals and what to do next with Warren and Mahoney.”

Her architect colleagues can point to a building like Commercial Bay and say they designed it, but a lawyer’s work is often less tangible, Charlotte says.

“Being able to point to this award as recognition of everything I’ve put into my career so far is a great feeling.”

She plans on using the prize money to attend a five-day Outward Bound Professionals course.

“I’m excited to take a bit of time to reflect and reset. Outward Bound is about building confidence, focusing on what you want to achieve, and planning how to get there - those big questions are useful to be thinking about at this stage of my career.”

Having moved from private practice to an in-house legal role just two years ago, Nathan Watt is pleased to have his work recognised as one of the winners of the Young In-House Lawyer of the Year award.

Nathan worked in private practice at law firm Anderson Lloyd for eight years before making the move to an in-house role in Dunedin with gold producer OceanaGold in November 2019.

He says that he loves the diversity and challenge that come with working in-house.

“When you’re working in a law firm, there’s a lot of admin involved, especially with billing and tracking time. Moving in-house was fantastic because there’s so much variety, not just in the legal sense but also in the people I work with.

“I generally do a lot of work on commercial contracts and property, but there’s also more ad-hoc work and fielding interesting questions from colleagues in different areas. It really breaks up your day and gets you thinking creatively.”

Nathan says the in-house role means he works with people from different backgrounds and experiences, than he did in private practice.

“I get to work with engineers, geologists, project managers, commercial managers - all sorts of people who work differently and have different ways of approaching problems, which is refreshing.

“Working in-house means you’re exposed to a lot of new ways of approaching challenges, which I think helps make you a better lawyer.”

Nathan says winning this award is the number one proudest moment of his career so far. “Most people think they’re doing alright in their jobs day-to-day, but winning an award like this is a great confirmation that you’re doing the right thing and making a meaningful contribution to your company.”

Nathan is planning on using the prize money to travel to an in-house conference overseas “to see how what we’re doing in-house in this country stacks up internationally. That means Australia at the moment, but could mean further afield once the borders open up more”.

27 May 2021 – MAS is calling for nominations for candidates to fill one governance role within the MAS Group.