Welcome to the spring issue of Investor News. In this edition we share news about changes we’re making to some of our portfolios and how we’re making it even easier to join the MAS KiwiSaver Plan. You’ll also learn about investment returns during the September quarter and our investment managers tell us what their outlook for financial markets is.

We’re making some changes to our investment portfolios

From 1 December 2018 we plan to make some changes to the investment portfolios of the MAS KiwiSaver Plan and MAS Retirement Savings Plan that we believe will improve the long-term outcome for Members, provide more transparency and make it easier for Members to make marketplace comparisons.

The key changes are summarised below.

No change in Risk Indicator ratings

The change in target asset allocation does not change the Risk Indicator ratings of the Portfolios as disclosed in the Product Disclosure Statements so you shouldn’t need to change the Portfolio you are invested in. To check your risk profile and make sure you’re invested in the most appropriate Portfolio, you can answer a few questions here.

If you’d like to make any changes or switch Portfolios, you should complete a switch form here and email it to us at masinvest@linkmarketservices.com.

The change in estimated Annual Charges for individual portfolios is outlined in the table below:

Note: The Annual Charges for a particular portfolio/fund are the same for the MAS KiwiSaver Plan and the MAS Retirement Savings Plan.

A copy of the latest relevant Product Disclosure Statement is available here (MAS KiwiSaver Plan & MAS Retirement Savings Plan). If you’d like to talk with us, please call us 0800 800 627 or email info@mas.co.nz.

Investors in our more Growth asset oriented portfolios enjoyed returns of up to 5% for the quarter. This brings annual returns for these portfolios as high as 16%. The strong outcomes masked significant differences in returns between different markets and asset classes over the quarter. This is illustrated in the chart below that shows the returns achieved in the MAS KiwiSaver Balanced Portfolio. 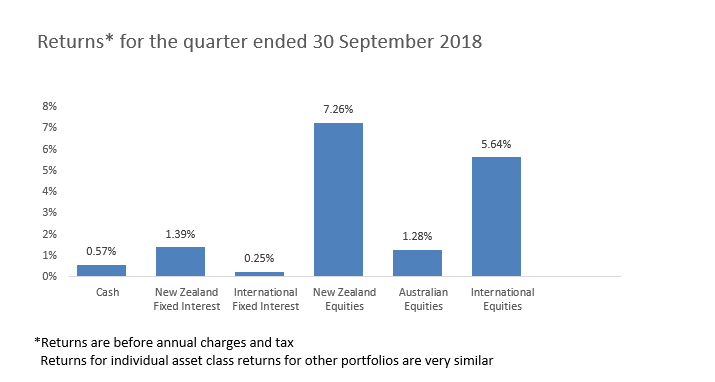 Driving this quarter’s returns were ongoing strong earnings growth by companies in the United States and increasingly around the world. This helped offset bouts of investor nervousness (reflected in lower weaker share prices) around possible trade wars between the United States, China and the European Union.

As New Zealand is a small, export dependent economy, the possibility of us being caught up in a global trade war led to a 2% fall in the New Zealand Dollar. This boosted the value of shares held overseas. It also led to increased expectation by investors that the New Zealand Official Cash Rate (OCR) will remain at or below the current record low of 1.75% well into 2020. In contrast, the United States Federal Funds Rate (their equivalent of our OCR) was 2.25% at quarter end, and in response to a strongly growing economy and rising inflation is likely to be 3.25% in a years’ time. This makes the United States more appealing to fixed interest investors than New Zealand.

Despite some weakness in international sharemarkets since quarter end our investment manager, JBWere, remain positive on the potential returns from international equities. They point to a backdrop of robust economic growth in most countries, strong earnings growth and low interest rates. That said, they note that the fact that we are in the late stages of one of the longest increases in global share markets in history is reason for caution. Further, there are several potential risks that they are watching closely, like developments around global trade and instability in emerging markets such as Turkey and Argentina. They don’t see significant risk warning indicators on the near-term horizon to cause material concern. They continue to forecast global equities to generate a positive return over the next 12 months. But investors will need to adjust to a higher level of volatility.

Funds under management exceed $1.5bn for the first time

Update: 15 February 2017 - Here is everything you need to know about Kaikoura Earthquake Claims.