We provide the following insurance cover for your own house or your holiday home, offering a wide range of benefits to help ensure you never have to worry about the roof over your head. We also provide cover for rental properties and lifestyle properties.

We are proud of the strong reputation we have established for an empathetic and top quality claims service. Our insurance has wide-ranging benefits, meaning you’ll never need to worry about whether you’re covered or not.

Our policies are written in language that’s easy to understand and we’re always happy to answer any questions you may have about this important agreement between us.

You can choose one of the following cover options for your house:

For all house policies, it’s important that you provide us with an accurate measurement of the total floor area of your house. Check out our House Insurance Application Guide and the Area Replacement Fact Sheet to help you get this right. They also highlight other features you may need to tell us about.

About a third of the cost of your premium is made up of GST and levies we collect on behalf of government agencies.

We collect a levy for the Earthquake Commission (EQC), which helps EQC fund the cossts of recovering from major natural disasters. This levy was increased in July 2019, to cover increases in the amount of cover EQC provides for houses.

We also collect a levy on behalf of Fire and Emergency New Zealand, which funds the costs of emergency services.

Just as you buy insurance from us, we buy our own insurance from global companies known as reinsurers. This helps us ensure we have enough funding to cover the costs of major disasters, while still being able to pay out on everyday claims.

Traditionally, we've spread the cost of this reinsurance equally across all the house insurance policies we hold. In effect, the premiums paid by those in less risky parts of the country have subsidised the premiums for those in riskier areas. Natural disasters in the past ten years have seen the cost of this reinsurance go up and we need a fairer way to distribute these costs to our Members.

After the Canterbury and Kaikōura earthquakes, insurers have more detailed and reliable data about seismic risk in New Zealand than ever before, and we can now differentiate between regions more fairly when it comes to setting insurance premiums. This pricing method is often referred to as "risk-based pricing".

In essence, risk-based pricing simply means we take greater account of the particular risks faced by houses in different regions around the country when it comes to setting premiums.

It's the same principle we use when we set premiums for other forms of insurance. When you insure your car, for example, you'll pay more if it's an older car, or if it includes performance features. 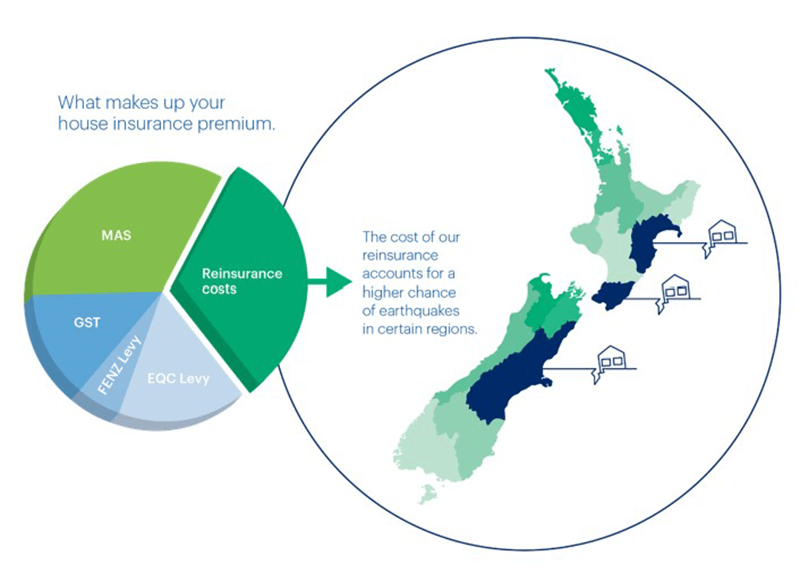 Why insure your house with MAS?

As a mutual, we work for you, our Members. We ensure that you are getting the best possible cover for a fair premium and excess.

So you want to...buy your first home?

Buying your first home can be a daunting prospect. Whatever age you are, it feels like something your parents should be doing, not you. Though with the right tips and tricks it needn't be that hard at all! Continue reading...

This webpage is intended as an information guide only and does not form part of the policy document or any contract with MAS. This webpage does not take into account your own personal financial situation or goals. If you would like more detailed financial advice we can get one of our advisors to contact you. Normal underwriting criteria apply for all insurance products. Special conditions and/or excesses may apply to the situations that meets your specific needs.