Despite the volatility of global stock markets in 2020, the Australian and New Zealand markets have remained resilient. One of the success stories coming out of our part of the world in Afterpay.

The MAS KiwiSaver and Retirement Savings Plan funds invest in Afterpay, and we had a chat with Tom Phillips from investment manager JBWere, about why the stock has performed so well.

Who is Afterpay and what do they do?

Afterpay (APT) is a Melbourne-based financial technology company founded in 2015, and specialising in “buy-now-pay-later” products for customers, merchants, and businesses in Australia, NZ, USA, Canada and the UK. They listed on the ASX in 2017 and started in NZ in September 2017.

Overall, we were looking for a market ‘disruptor’ with a management team in place who had a proven record for delivery.

The business model is relatively simple and while the buy-now-pay-later model is hardly a new idea (credit cards and hire purchase are the most obvious examples) unlike a credit card facility, Afterpay is not a rolling line of credit and there is never any interest payable (provided you repay on time). Afterpay is effectively the reverse of a credit card, charging the retailer, not the consumer, when goods are purchased.

How did you approach your initial investment?

We were very interested in Afterpay as an investment, but we didn’t jump in immediately. We had some initial concerns around how Afterpay would manage delinquency risk with the product potentially appealing to younger customers who may present a higher credit risk - and so our initial position was modest.

But our investment has benefited from first-mover advantage and our position has increased as we tracked Afterpay against key milestones such as delivering against revenue forecasts, customer growth and seeing positive feedback from customers.

Why have Afterpay performed so well?

Afterpay has taken Australian and New Zealand retailers and shoppers by storm (and is expanding), and I think there are several factors that play into this success.

Firstly, I think we have seen shifts in how customers are paying for products, especially younger customers. We had noticed millennial consumers were different in that they had debit cards, not credit cards. It has seemed that many spenders, particularly millennials, are conscientious and don’t like to spend money they don’t have. Afterpay was well positioned to meet this change by allowing customers to use their own money but spread it out in instalments. Customers also don’t pay for the service.

We also think that Afterpay has been positively received by retailers given active promotion to a tech savvy client base drives increased sales.

Afterpay makes the bulk of its money from the retailers that offer the service. The Afterpay payment model has proved difficult to replicate and it has certainly benefited from the first-mover advantage. 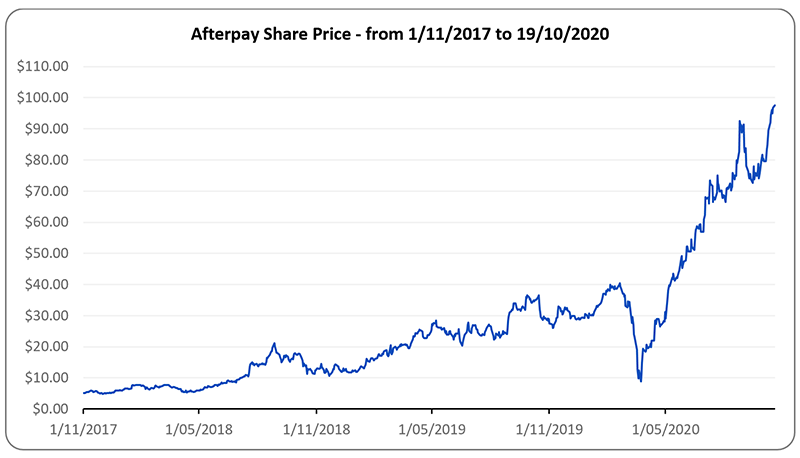 What does the future hold?

Afterpay’s growth has exceeded even our initial expectations and has started to transition into a global operator with large international shareholders. Of particular note, Tencent joined the share register in May this year as a substantial holder.

Afterpay is currently the 15th biggest company listed on the ASX (as at 19 October 2020), and is establishing itself in new sectors, including health, entertainment, and travel. It is also opening up to Asian markets.

We believe Afterpay will continue to grow, structural change towards eCommerce in the current environment where customers have been forced to move online for purchases will help.

Despite potential risks, Aftepay’s model is scalable and lends itself to having a global reach. The most obvious near-term risks are weak September and December quarters as fiscal stimulus subsides, credit loss rates exceeding our forecasts and competition impeding growth. Neither, in our view, will have any material impact to the longer-term opportunity.

This document comprises general advice only. In preparing it, JBWere (NZ) Pty Ltd’s (“JBWere”) Investment Strategy Group did not take into account the particular investment objectives, financial situation, goals or needs ("financial circumstances") of any particular person. Accordingly, before acting on any advice contained in this document, you should assess whether the advice is appropriate in light of your own financial circumstances or contact your adviser. The disclosure statement for Tom Phillips is available on request, free of charge.

For the purposes of the Financial Advisers Act 2008 ("FAA"), the content of this document is of a general nature and is intended as a source of general information only. The distribution of this document is not a "personalised service" and, to the extent that it contains any financial advice, is intended only as a "class service" provided by JBWere within the meaning of the FAA.

JBWere and its respective related entities distributing this document and each of their respective directors, officers and agents (“the JBWere Group”) believe that the information contained in this document is correct and that any opinions, conclusions or recommendations contained in this document are reasonably held or made as at the time of compilation. To the maximum extent permitted by law, (but, in respect of our clients, subject to the applicable terms and conditions of our engagement with them), the JBWere Group disclaims all liability and responsibility for any direct or indirect loss or damage which may be suffered by any recipient through relying on anything contained in or omitted from this document.

Copyright JBWere (NZ) Pty Ltd ABN 13 138 488 418. All rights reserved. No part of this communication may be reproduced without the permission of JBWere.

This article is of a general nature and is not a substitute for professional and individually tailored advice. Medical Assurance Society KiwiSaver and Retirement Savings Plan Trustees, Medical Assurance Society New Zealand Limited and JBWere (NZ) Pty Ltd, their parent companies and associated entities do not guarantee the return of capital or the performance of investment funds. Returns indicated may bear no relation to future performance. The value of investments will fluctuate as the values of underlying assets rise or fall. For Money Week 2020 Henry Yule, an Auckland-based Veterinary Science graduate, now working as a full-time veterinarian, gives his advice to graduates heading into the workforce. So you want to...be debt free?

Like many of us, you probably take your ability to work and earn a living for granted. But if you were suddenly unable to work for a prolonged period, how easily could you meet your regular financial commitments and maintain your family’s lifestyle?